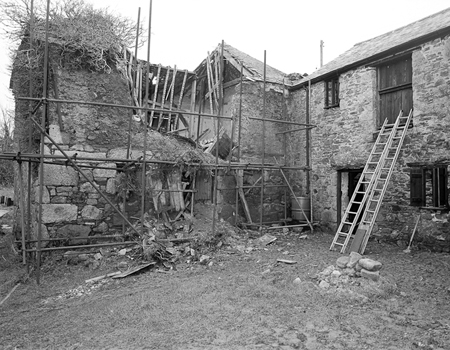 To achieve a successful and long-lasting repair a full understanding of the substrate and structure is required. Our initial question is, ‘What has caused the damage?’.

There are many reasons for varying states of disrepair – water penetration, failed cladding, failed roof timbers, bees, and subsidence. These, we have found, are the most common causes.

Deep hollows and rat runs, for example, can be quite easily and quickly repaired with the use of pre-formed cob bricks and/or blocks.

Using a lime mortar as a binder, shrinkage is negligible. Where rat runs are numerous, it would be impractical, and could possibly compromise the stability of the wall, where these would have to be ‘chased out’ to accommodate so many cob bricks and/or cob blocks.

In these instances, a lime mortar ‘slurry’ can be poured into the holes, plugging them with hessian while working up the wall. Once the lime has set the hessian is removed and there is scope to chase out for the cob brick or blocks on the face of the wall.

Where severe erosion has occurred, usually on the corners of cob buildings, again cob blocks can be chased into the existing cob in a stepped format. Shallow hollows both externally and internally may be left as they are. Slow undulations add character to the lime-plastered walls.

This entry was posted on Monday, May 19th, 2014 at 12:53 pm and is filed under Blog, Cob Repairs. You can follow any responses to this entry through the RSS 2.0 feed. You can leave a response, or trackback from your own site.