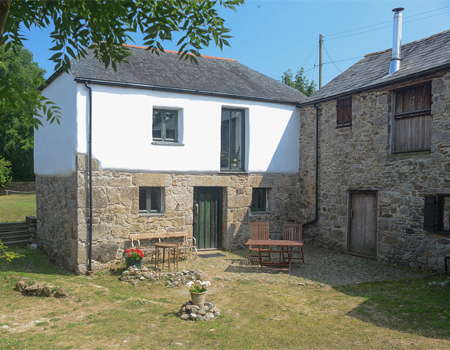 As an experience practitioner of all aspects of Cob Construction, Leslie Cornell has completed many projects from small cob wall repairs to complete rebuild and new build cob walls.

This particular project was a great one. In early 2000 Leslie Cornell and his team had the opportunity to restore this ancient granite and cob barn in St Austell, Cornwall which was part of a complex of agricultural buildings. Before its sympathetic restoration, the great storm in 1987 had sealed its fate.

Over time this 18th century cob barn and its surrounding buildings have been restored.

Using lime products and soil sourced on site this project required major rebuild of its cob walls and stonework.

In addition to the lime applications, cob repairs and rebuilds a sympathetic extension was built at the rear of the property. The barn has been restored and modernised but sustainably.

This entry was posted on Monday, May 19th, 2014 at 3:13 pm and is filed under Blog. You can follow any responses to this entry through the RSS 2.0 feed. You can leave a response, or trackback from your own site.